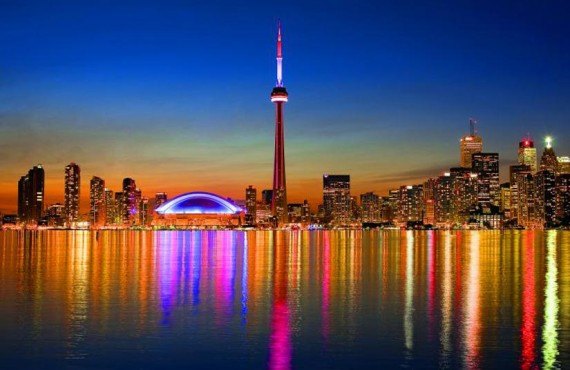 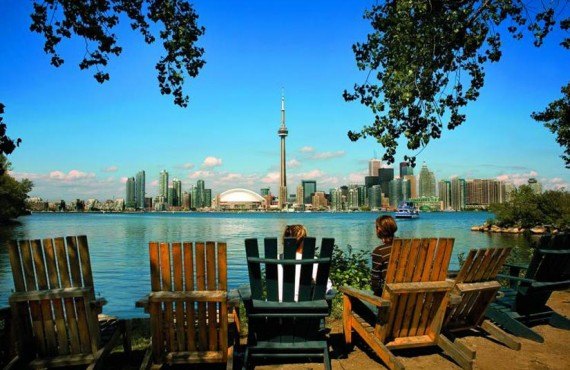 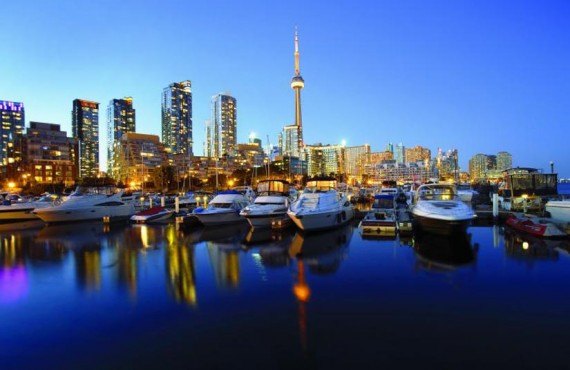 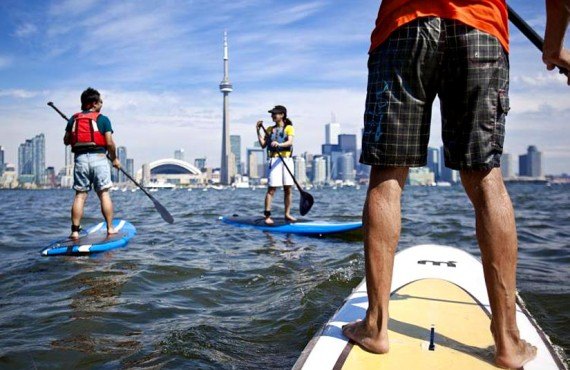 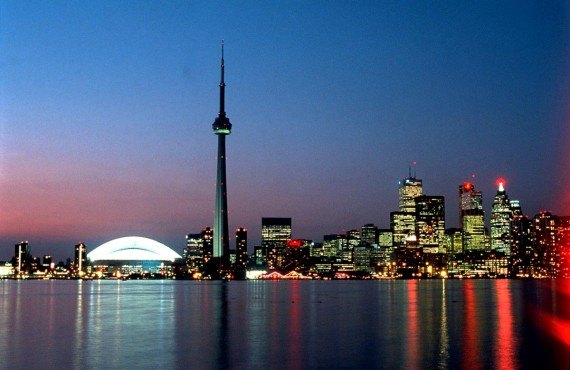 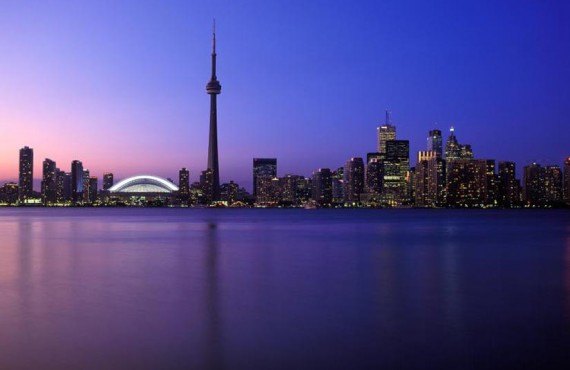 With a population of 2,930,000, Toronto is the largest city in Canada. It is also known as the “Queen City”. Dynamic, cosmopolitan, exciting and international, Toronto is made up of six formerly separate municipalities, each with its own distinct history and identity.

It is heralded as one of the most multicultural cities in the world, with over 200 distinct ethnic origins represented among its population.

Although the city is not easy to visit in a motorhome, you can definitely stay a few days prior to pick up an RV rental in Toronto. Best of both worlds!

THE SHORES OF LAKE ONTARIO

This 553-metre-high concrete communications tower, built by Canadian National railway company in 1976, defines the Toronto skyline. The upper levels are reached by one of six high-speed glass-fronted elevators. Enjoy a breath-taking view as you race upwards at 22 kilometres per hour to a height of 345 metres, almost the height of the Empire State Building!

The LookOut deck offers breathtaking views of the city and the surrounding area. On the level below, experience the transparent Glass Floor, with a view 342 metres straight down! Designed for you to have fun on it, you can walk or crawl across it, sit on it or even jump on it. Will you dare? Or enjoy the view from the world's highest revolving restaurant, 360 Restaurant. Reservations are necessary.

Located at the foot of the CN Tower, this huge 135,000 square foot aquarium takes you on a true underwater journey, through different habitats from around the world, where fascinating sea creatures live in more than 5 million liters of water! You will have the chance to visit different galleries including Canadian Waters, with a section on the fascinating biodiversity of the Great Lakes, the Rainbow Reef of the Indo-Pacific Ocean, Dangerous Lagoon, the Discovery Centre and its interactive exhibits, Ray Bay, Planet Jellies, and the "Curious Creatures" exhibit, which will introduce you to the life of reporter, adventurer, explorer, draftsman and great collector Robert Ripley (1890-1949) in addition to many curious creatures from the four corners of the world.

Open daily from 9 a.m. to 11 p.m., but closes earlier on occasion for private events.

Toronto's highest concentration of cultural and recreational offerings is found at the Harbourfront Centre. This 4-hectare waterfront park offers a variety of events and activities year-round on its quays and in its converted terminal buildings.

The Toronto Islands, with their stately old trees, smooth lawns, marinas and sandy shores, offer splendid views of downtown Toronto along some 6 kilometres of shoreline.

Centre Island has an amusement park, a beach, and numerous cafés and restaurants. Explore the more rustic charms of nearby Algonquin Island and Ward Islands along kilometres of walking and biking trails.

This ultimate family destination features children’s play areas, a skatepark, a drive-in, campfire sites, boat rentals, tours by segway, a 600-seat IMAX movie theatre, many restaurants and much more. The site stretches across three man-made islands, complete with lagoons and marinas, along the Lake Ontario waterfront.

The dark glass towers of the Toronto Dominion Center were the first major structures to be built in Toronto's financial district, one of the largest business communities in North America. Some 21,000 people work in the complex, which also serves as headquarters and corporate offices for a number of influential Canadian businesses.

The Hockey Hall of Fame is the largest hockey museum in the world. In addition to learning all about hockey and exploring the world's largest collection of hockey memorabilia, you will have the chance to take part in a number of on-site activities, such as interactive games and theaters. The original Stanley Cup, dating from 1886, is on display in the Great Hall, housed within the historic former head office of the Bank of Montreal.

Toronto City Hall was the symbol of Toronto until the construction of the iconic CN Tower, and remains one of Toronto's best known landmarks. Built in 1965, its curved twin towers surrounding a white disk-like council chamber are an ideal symbol of a modern and dynamic city.

The Toronto Eaton Centre is Canada's ultimate shopping destination, with over 230 shops, restaurants and services. It is the largest shopping centre in Toronto.

Millions of tourists from around the world visit the Centre each year to admire its architecture and its metropolitan atmosphere.

Welcome to one of the largest art galleries in North America! Its 45,000 square metres of space house a sublime collection of almost 95,000 works, including Indigenous and Canadian art, European, modern, contemporary and African art, photography, prints and drawings, a 380,000-volume library & archives collection, and the Thomson Collection, a gift of 2,000 European and Canadian works from Ken Thomson's private collection.

If you love shoes, this fascinating museum is a must! The exhibits reflect over 4,500 years of history through more than 1,000 shoes and shoe-related objects chosen from a collection of over 13,000 artifacts. Highlights include a pair of 16th century Italian platform shoes, a collection of footwear from some of the earliest civilizations on earth, an extensive collection of Indigenous North American and circumpolar footwear, an assortment of celebrity footwear.

This impressive museum, commonly known as the ROM (Royal Ontario Museum), is the largest museum in Canada. It is home to a world-class collection of 6 million artworks, cultural objects and natural history specimens displayed in 40 gallery and exhibition spaces. There's even an area reserved for children. It's best to pick up a map when you arrive to plan your visit, as the H-shaped museum has no less than 5 floors!

Open daily from 10 a.m. to 5:30 p.m. between July 1 and the first Monday in September. Closed on Mondays in low season.

Built in 1914, Casa Loma was the sumptuous residence of financier and former soldier Sir Henry Pellatt. Each year, over 350,000 visitors tour Casa Loma and the magnificent estate gardens. The magnificent 98-room "castle" features a great hall, a conservatory, a library, secret passages and much more. A tunnel connecting the mansion to the stables houses a photo exhibit on the "Dark Side of Toronto", while the stables showcase a collection of vintage cars from the early 1900s. The on-site BlueBlood Steakhouse serves dry-aged steak and delicious seafood.

Since 1969, this temple of science has been inviting visitors of all ages to explore the more than 500 interactive activities in its eight exhibition halls. It offers a wide variety of science workshops, demonstrations and shows, as well as an IMAX theater, a restaurant and cafés.

Open Wednesdays, Fridays, Saturdays and Sundays from 10 a.m. to 5 p.m. and Thursdays from noon to 7 p.m.

The Toronto Zoo's mission is "connecting people, animals and conservation science to fight extinction": with more than 5,000 animals belonging to 450 species from around the world, you could say they're doing their part. The zoo is divided into seven different geographic regions, each showcasing animals and plants from that area of the world: Africa, the Americas, Australasia, the Canadian Domain, Eurasia Wilds, Indo-Malaya, and Tundra Trek. There are also opportunities to meet some of the animals and their keepers, a Kids Zoo and Splash Island water park, a zipline... Something to please everyone!

This tiny restaurant in Kensington Market is immensely popular for its famous and delicious tacos. The taco menu features a variety of options such as meat, fish, shrimp, octopus, and for vegetarians, mushrooms and cactus, all accompanied by homemade salsas. Their signature dish is their Gobernador taco with house-smoked tuna, grilled shrimp and cheese. They also serve a tasty seafood ceviche served with tostadas and a dish of the day. As there is often a lineup and there is no real seating area, you can enjoy your meal while strolling through the market.

Open Wednesday-Sunday from noon to 8 p.m.

The Amsterdam Brewing Co. has been brewing its own beers since 1986 and you can taste them at their restaurant, the Amsterdam Brewhouse. The chef works together with their brewers to create dishes that are prepared not only using their beers, but also with ingredients that are used in the brewing process. The unpretentious pub-style menu features wood fired pizzas, burgers and sandwiches as well as meat, pasta, fish and tofu dishes. In the summer, you can sit on their huge terrace overlooking the vast Lake Ontario and enjoy your beer.

This bustling downtown restaurant is always committed to offering delicious cuisine with a focus on great ingredients and warm hospitality. Chef Carl Heinrich concocts dishes such as smoked cheese perogies with cauliflower cream, Brussels sprouts and rösti; Station burger with homemade rolls, garnish and rosemary fries; two-way duck with sweet and sour rutabaga and roasted cabbage; braised rabbit fettuccine with oyster mushrooms and butternut squash. (As the menu may change, dishes are named as examples.)

360 offers delicious market-fresh Canadian cuisine at a height of 350 metres! Enjoy a glass of Canadian wine as you admire a unique 360-degree panoramic view of the city. Open for lunch and dinner; reservation is recommended. Access to the LookOut and GlassFloor is free with the purchase of a prix fixe!

Located on the 54th floor of the TD Bank Tower in Toronto's financial district, Canoe offers spectacular views of the city and inventive regional Canadian cuisine created by the chef. The menu, from succulent foie gras to grilled-to-perfection meats to spectacular seafood, is simply prepared and spot on. The tastes are nuanced, surprising and textured. And, thanks to a presentation that is gallery-worthy, always lovely to admire. The service is unpretentious and professional.

Created in 1987, the Toronto Jazz Festival presents an impressive lineup of over 1,500 artists, including some of the greatest jazz celebrities in the world. Today more than 500,000 jazz lovers come together each year over the 10 days of festivities to attend one or more of the 350 concerts held all across the city.

Toronto's Pride Week is one of the premier arts and cultural festivals in Canada. It is not surprising that the event is an unqualified success, year after year: attendance of over a million people, street festival, live entertainment, street fair, costumes, Pride Parade, and much more...

Canada's largest city is home to this exuberant celebration of Caribbean music and culture, featuring steel bands, a King and Queen competition, concerts and musical boat cruises. The festivities culminate with the spectacular carnival parade. The largest Caribbean festival in North America. 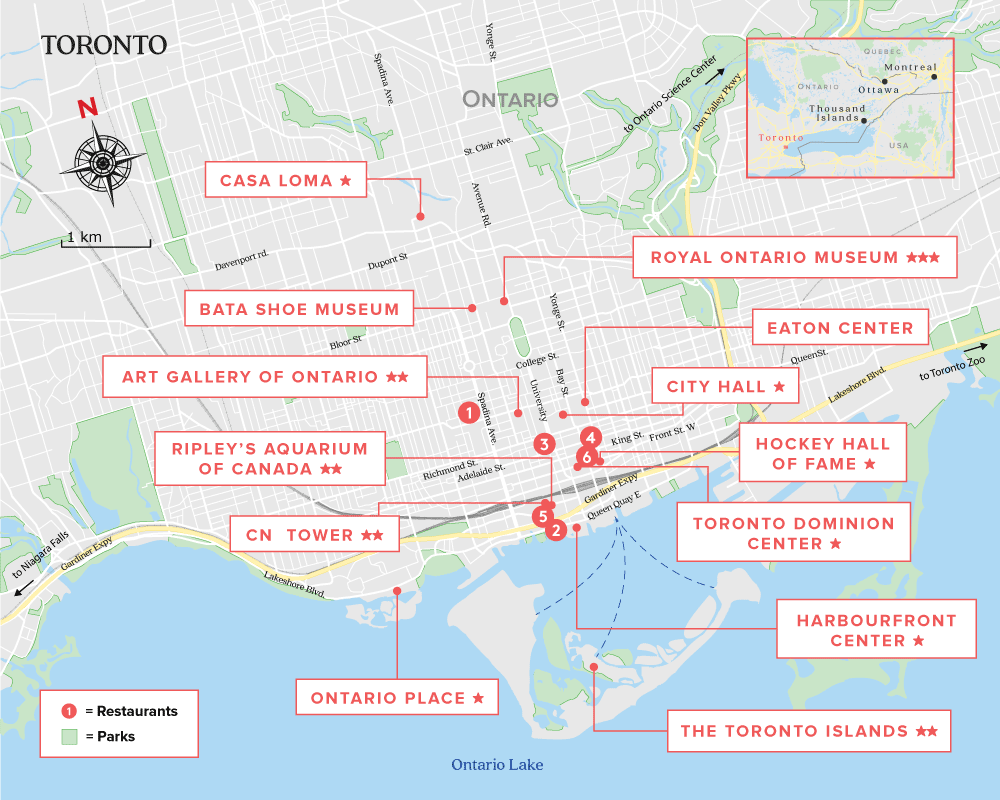 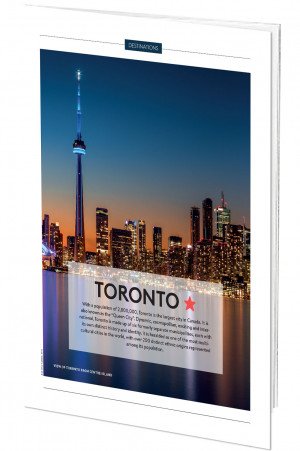